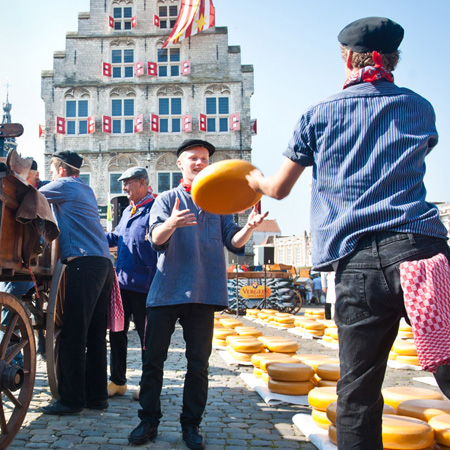 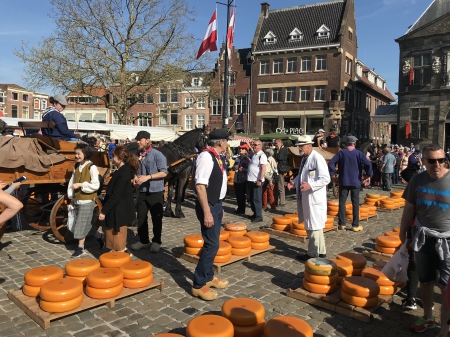 In 1395 the town council of Gouda set out clear guidelines for the organisation of the markets in Gouda. The butter market was located on the east side of the town hall, the cattle market on the west. Already at the beginning of 1400, there appear to have been several livestock markets and cheese markets in Gouda.

In a large area around Gouda dairy farming was the main source of income. This had to do with the peat that limited the ways in which the land could be used. Gouda became the centre of a huge livestock farming region. Many thousands of kilos of dairy (and livestock) were traded at the markets in Gouda each year. Because of this and the town’s strategic location along the rivers IJssel and Gouwe as a transit port between Rotterdam and Amsterdam, early on in its history Gouda became a regional centre of, among others, the trade in dairy produce. The cheese warehouses that have survived to this day are a testament to this. Gouda cheese was known for its long shelf life and excellent taste. Today there are still dairy farms in the area close to Gouda. Fortunately, because they perfectly meet the demand of today’s consumers for authentic, honest food.

Well into the 16th century, Gouda cheese was known as (sweet milk) ‘Stolkse’ or ‘Stolwijkse’ cheese. In 1412, the cheese market of Stolwijk was relocated to Schoonhoven. It is not until around 1500, that we find clearer signs that the cheese trade actually started to be concentrated in Gouda. Around 1540, a long-lasting conflict with Schoonhoven over the cheese market was finally settled in favour of Gouda. A few years later, in 1549, mention is made of Gouda cheese being exported to the Antwerp market, where over the course of the 16th century the cheese gained a dominant position.
At that time investing in the cheese and butter trade was readily supported by the town council and enterprising citizens. They saw new chances for Gouda, at a time when the beer and cloth industry were in serious decline. Gouda became more and more important as a trading town. Various guilds and the Waag controlled the supplied goods, which could then be traded.

The current Waag (Weighing House) dates from 1668 and was designed by architect Pieter Post. He also designed the Waag in Leiden and the town hall in Maastricht. The stately building that replaced a wooden building, conveyed the importance of Gouda as cheese city much better. The function of the building is clearly visible on the relief on the facade of the weighing house for cheese: ‘the weighing business in marble’ by sculptor Bartholomeus Eggers.
Incidentally, from 1611 the dairy trade also had a building at the Markt. The former Grote School, which was located where the beautiful Arti Legi is housed now, was turned into the Boterhuis (Butter House). In 1616, this trading centre for butter, cheese and dairy got a new facade. The Boterhuis was also used to store baskets for wheat and cheese. In 1853, the butter market was relocated to the town hall at the Markt. Both the cheese and the butter market managed to maintain their position without any problems into the 19th century. Walking through the town, you would have smelled the aroma of cheese, which usually wafted from one of the numerous cheese warehouses.
Up until WWII, on market days, farmers and traders set the scene in the town centre and the market square, and also the farmers’ wives tagging along to do their shopping around town, or at the general market. At the market farmers and traders – often directors of very large export businesses – sealed their deals with the clapping of hands. Numerous transactions also took place in one of the neighbouring cafes, where the deal was clinched with a drink on the seller.

Until 1987, the cheese market still had its original function. Today the trading of cheese at the cheese market is a spectacle much loved by tourists. A bit of nostalgia in the most authentic location possible.
‘Say cheese, say Gouda’ is a slogan that dates from a time before the slogan was invented. Wherever you are in the world, just saying the word Gouda is enough to put a smile on people’s faces: ‘Cheese!’

The name Gouda was first mentioned in official documents from 1143. Back then, cheese was already being produced on the farms in the area around Gouda. That cheese was taken to Gouda to be sold: Gouda cheese. 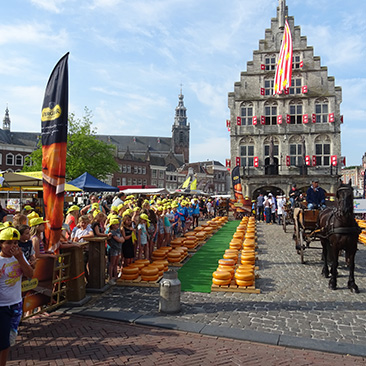 For centuries Gouda cheese has been traded at the Markt in Gouda on Thursday. And just like in the olden days, farmers and cheese traders agree on a price by the clapping of hands. Besides the world famous cheese, you can also enjoy stalls where syrup waffles and ‘poffertjes’ (Dutch mini pancakes) are made and where craftspeople demonstrate ancient skills. 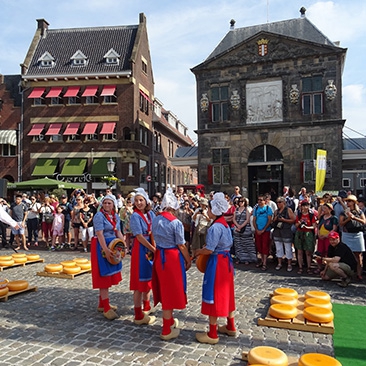 At every cheese market there is live music provided by different choirs, dance groups, and of course by barrel organ De Lekkerkerker, a Dutch Cultural Heritage Monument.
Each week the performance will be announced here. 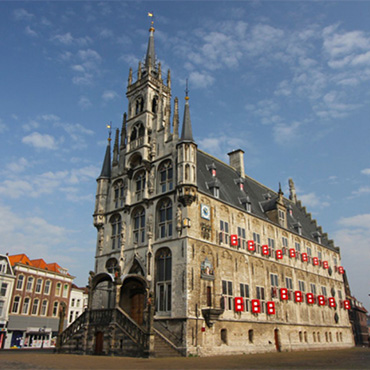 Gouda is world famous for its cheese, syrup waffles, clay pipes and pottery. The compact historic town centre with all its sights, authentic shops, narrow medieval streets, canals, and numerous court yards, is well worth a visit. 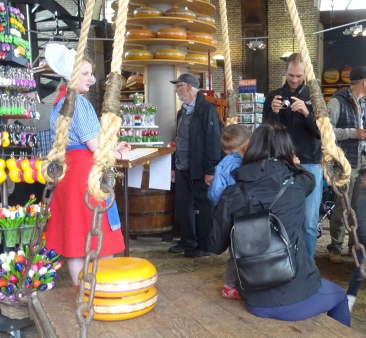 The current Waag (Weighing House) was designed by architect Pieter Post and completed in 1668. Originally all sorts of things were weighed at the Waag, but over time it became limited to just cheese. At the cheese market visitors can see how cheese is weighed at the Waag. 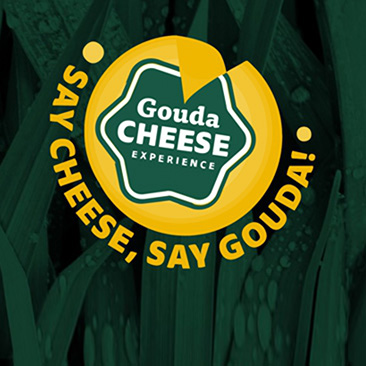 Say cheese, say Gouda. It is known all around the world, it is eaten all around the world. But do you actually know the story behind Gouda cheese? This is your chance. Experience Gouda cheese at the one and only Gouda Cheese Experience. In our beautiful monumental building right in the centre of Gouda you go on an exciting interactive journey through a cheese-coloured, yellow universe. 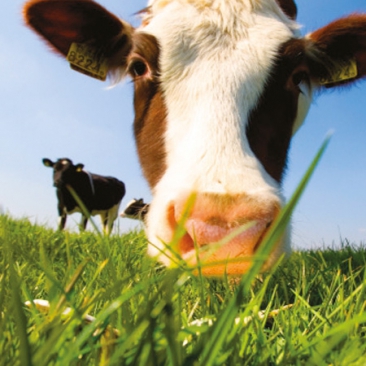 For centuries the cheese was traded in the town from which it derives its name: Gouda. However, it was actually made in the surrounding polders: Cheese Valley. An oasis of peace and open space in between the four largest cities in the Netherlands. In this classical Dutch landscape, with grazing cows, canals, pollarded willow trees, cheese is still made from the milk of the farmers’ own cows. 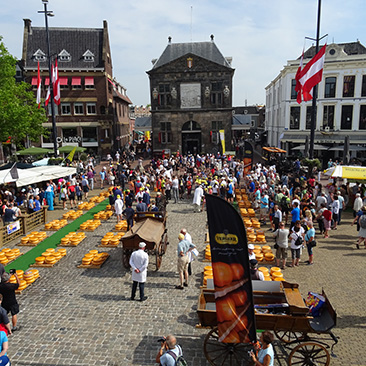 Gouda was first mentioned as a place in official documents from 1143. At that time cheese was already being made on farms in the immediate vicinity of Gouda. That cheese was brought to Gouda to be traded there: the Gouda cheese. 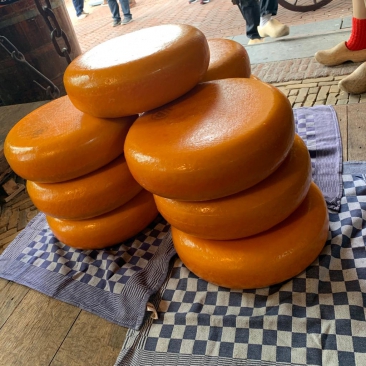 If you have any questions about GOUDA KAASSTAD, please send us a message via our contact form.